New York Times: Young Wall Streeters at a Dinner for a Cause

Young Wall Streeters at a Dinner for a Cause 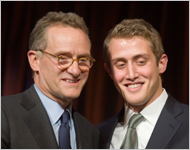 (PHOTO: Howard Marshall of Oaktree Capital Management and his son, Andrew; John Marshall Mantel for DealBook)
For several hundred young professionals, including many budding financiers, last week was a moment to think about college again.

About 580 people descended upon Cipriani 42nd Street in midtown Manhattan for the inaugural benefit of New York Needs You, a year-old nonprofit devoted to supporting first-generation college students.

The organization honored Mayor Cory A. Booker of Newark  and Howard Marks, the chairman of the investment firm Oaktree Capital Management (and a first-generation college student himself). See pictures from the event, which raised nearly $1.2 million, after the jump.

Led by Robert Reffkin, a 31-year-old vice president in Goldman Sachs’s merchant banking unit, the group is focused on helping out the less fortunate.  Its 20-person board drew heavily from finance and law, for good reason: the group has committed to stumping up $400,000 annually.

Scores of attendees in suits and cocktail dresses — most seemed to be under the age of 40 — milled about the Italian Renaissance confines of Cipriani, poring over the prizes available at a silent auction. Among the items up for bidding: lunch with Mr. Marks and tickets to Diddy’s birthday party. Others waited to have their photo taken by one of several society photographers.

A genuine celebrity, the R.&B. singer Estelle, also made an appearance, drawing a coterie of starstruck fans waiting around her.

And the list of corporate donors reads like a who’s who of Wall Street: Goldman, Citigroup, Skadden, Arps, Slate, Meagher & Flom, Barclays Capital, Credit Suisse and Debevoise & Plimpton were among the gold and silver sponsors.

But much of the evening’s focus was on New York Needs You’s 50 fellows, college sophomores and juniors picked for the two-year program. The fellows are paired up with mentors and attend all-day seminars twice a month to learn the basics of career success, from networking to making elevator pitches to learning which fork is the salad fork. They also receive free work attire and help getting internships and professional grants.

“Our goal is to create leaders,” Mr. Reffkin, who credits his own success to an array of nonprofits that supported himself and his mother, told DealBook.

Introduced by his son, Andrew (one of the group’s directors and an analyst at Blue Ridge Capital), Mr. Marks told the dinner crowd of his own experiences as a first-generation college student from Queens and of his own mentors, leading to his current perch as the chairman of a $75 billion investment giant.

The scene at Cipriani 42nd Street.

All photos by John Marshall Mantel for DealBook.